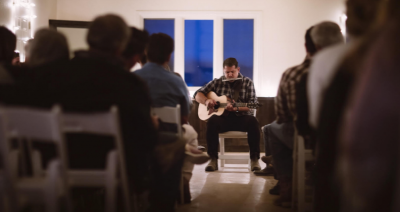 The Oxted Sessions are very excited to present William McCarthy – a man whose songs ‘show how much rock’n’roll can still give when the singer has absorbed so many blows, and stands back up to roar the lessons out’ (The Independent, 5 star review of Brighton show, Feb 2016).

William McCarthy is a musician, writer, and visual artist based out of Red Hook, Brooklyn, NYC. Now forging his path as an independent artist, McCarthy was formerly the primary songwriter for New York City bands Pela and Augustines – the latter of whom released three critically acclaimed albums and headlined such illustrious venues as The Roundhouse and Shepherd’s Bush Empire.

Having toured Europe and the UK with his first ever one-man show, “Journals, Maps, Stories & Songs: An Evening with William McCarthy,” he spent the next leg of his journey on a motorcycle trek through 14 countries in Europe. McCarthy documented his expedition through a series of travel stories for his Patreon audience titled, “And So The Night Falls.”

McCarthy’s second solo tour, “Music for the People”, allowed him to test his new work to sold out venues across the UK and Europe. Following this, he refocused his energy into his first solo album, “Shelter,” released in August 2017. Along with the release of Shelter, McCarthy wrote his first book, “UnSheltered”, a collection of autobiographical stories inspired by the songs of his first solo work.

In early 2018, he celebrated the first year of his Podcast, “Onward with William McCarthy,” a series where he explores his current projects, latest adventures, and thoughts on the world at large. McCarthy is currently taking his journey back west with his first solo tour in the United States, experimenting with the trending pop-up show-style concert that allows McCarthy to utilize his voice, his stories, and his charm to connect with and captivate his audiences on a deeper level. He visits Oxted as part of a solo UK tour.

Oxted is served by direct trains from London Bridge (30 mins), Victoria (40 mins) and East Croydon (15-20 mins). The venue is a 5 minute walk from Oxted train station. The last train back to London leaves at 23.23.

Alternatively, free parking is available at the venue.

A cash bar will be in operation.

For tickets, please visit We Got Tickets